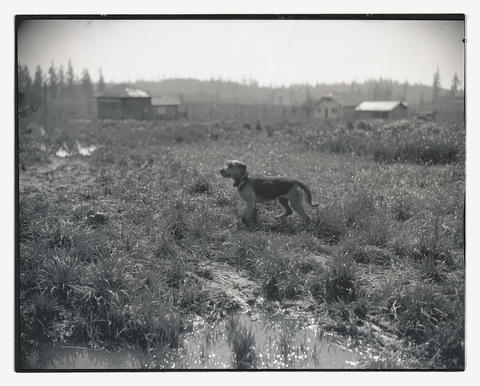 Photograph showing the pet dog of the Senti family outdoors on the family’s farm near Vancouver, Washington, after Tobias Senti killed his wife and children and then himself. A cropped version of this photograph was one of four that were published on Page 2 of the Oregon Journal on Wednesday, April 25, 1928. The photographs were published under the headline “Family of Four is Wiped Out.” They had the caption: “Scenes at the Tobias Senti home north of Vancouver [Washington], where Senti on Tuesday slew his wife and little son and daughter with a hatchet, and then blew himself to eternity with dynamite.” This photograph had the following additional caption information: “ ’Trixie,’ the dog, that survived Senti’s fury.” The photographs accompanied the continuation of a front-page story about the deaths. See related image Nos. 371N3508, 371N5861, 371N5873, and 371N5875.

Updated with additional information by Katie Mayer on January 17, 2019. Moved from Animals and Agriculture series to Crime and Court Proceedings series on February 14, 2019.