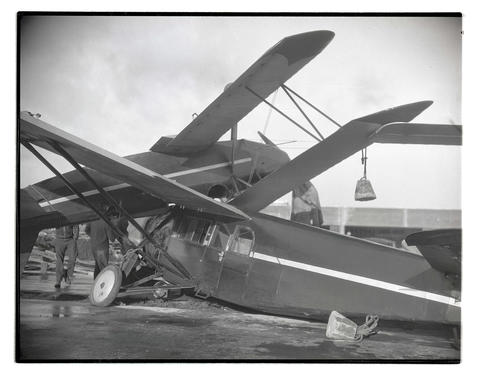 Damaged airplanes in pile at Swan Island after windstorm

Photograph showing an overturned Student Prince airplane lying on top of a Breese monoplane, the City of Portland, at the Swan Island airport in Portland after a windstorm on the night of Wednesday, February 19, and early morning of Thursday, February 20, 1930. The Oregon Journal published a similar photograph, image No. 371N6218, on the front page of the February 20, 1930 edition under the headline “The Wind’s Idea of a Good Time.” The photograph accompanied a story about the storm, titled “Wind and Rain Wallop City; Poles Broken.” See additional related image Nos. 371N5958, 371N5959, and 371N5961.