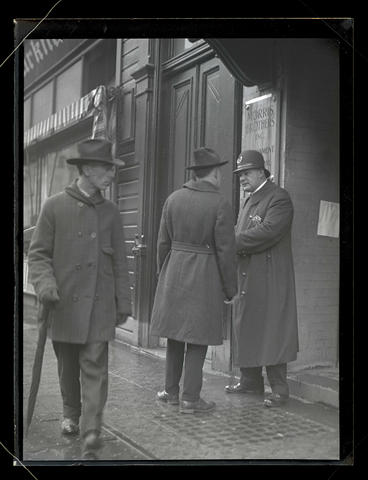 Photograph showing unidentified customers and a police officer outside the Morris Brothers Inc. investment bank in Portland on Monday, December 27, 1920, after the bank did not open for business. At left, an unidentified man is walking past as a second unidentified man speaks to a police officer who is standing in front of the doorway to the bank. A similar photograph, image No. 373G0336, was published on the front page of the Oregon Journal on December 27, 1920, under the headline “Bond Purchasers Wait; Etheridge Flees.” The photograph had the following caption: “Some of the customers of Morris Brothers, Inc., who gathered at the iron barred door today and tried to gain admittance to ascertain the status of their investments. The police moved on them unceremoniously whenever the crowd got too large.” The photograph accompanied a story about the bank, headlined “Warrant Out for Capture of Etheridge.” The story reported that the bank might have a deficit of up to $1,000,000, and the bank president, John L. Etheridge, had fled. The story reported that a warrant had been issued for Etheridge’s arrest on a charge of larceny by bailee. See additional related image Nos. 376G0016 and 376G0018.