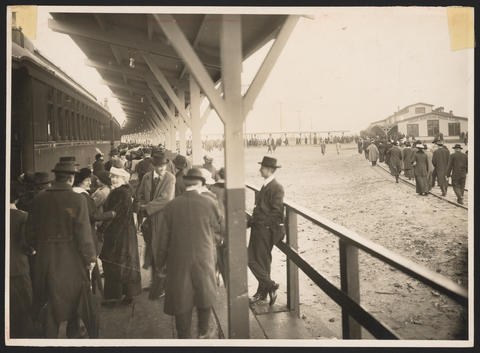 Photograph of a crowded railway platform next to an SP&S boat train. The boat train ran between Portland and Flavel, near Astoria, Oregon between 1915-1917. On the right, a crowd walks toward a building marked, "Great Northern Pacific S.S. Co." Glued to the back of the print is a caption that accompanied the photograph when the Oregonian published it on September 23, 1951. It reads, "Boat Train - For two years before U.S. entered first war, SP&S operated boat train to Flavel where steamers connected to San Francisco." The Oregonian published this in 1951 under the headline, "Service to Astoria Nears End." Another piece of paper glued to the back of the print reads, "Ry. Age -- News -- 2 cuts with extended caption -- Schmidt --Jan. 25, 1952. By Train to the Beach No More... Common Caption for two cuts: The once-heavily traveled line of the..."