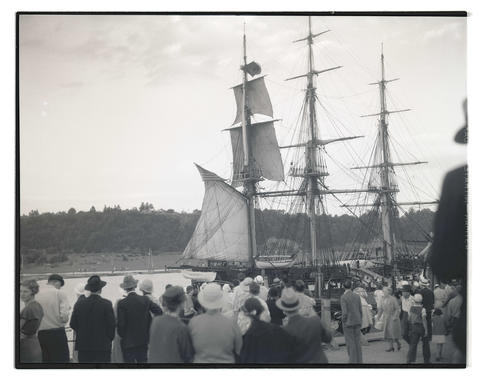 Photograph showing a crowd of spectators watching crew members set sails on the mizzenmast of the USS Constitution on Friday, August 18, 1933. The ship was moored on Swan Island, Portland, during a three-week visit as part of a national tour. A cropped version of this photograph was one of two that were published on the front page of the Oregon Journal on Saturday, August 19, 1933, under the headline “Constitution Preens Wings.” This photograph had the following caption: “While thousands of Portlanders looked on from the airport and the hill sides, sailors on ‘Old Ironsides’ set sails on the mizzenmast of the old warrior late Friday. Top picture shows the sails unfurled.” The photographs accompanied a story headlined “Landlubbers See Frigate Unfurl Sails.”