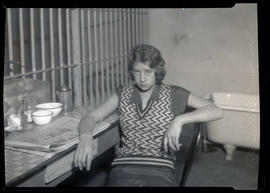 Mrs. Pearl Billings in jail after holdup at service station

Portrait of 18-year-old Pearl Billings sitting in a chair in her cell at the Clackamas County Jail in Oregon City on Saturday, February 21, 1931. According to a story published on the front page of the Oregon Journal that day, Billings was arrested after participating in a holdup with 22-year-old William Wheeler at the Robinwood service station near Lake Oswego on February 20, 1931. During the robbery, Wheeler was shot and killed by the service station’s proprietor, R. W. LaDue. According to the story, Billings told police Wheeler had kidnapped her and she had no knowledge of plans to hold up the service station until they were inside. A cropped version of this photograph and image No. 371N1454, showing Mr. and Mrs. LaDue, accompanied the story. The photographs were published under the headline "Bandit Victim 'Gets His Man.' " This photograph had the following caption: "Mrs. Pearl Billings, companion of the dead man. She went outside and started the car's engine for the proposed escape. Mrs. Billings fled from the scene but was captured by sheriff [E. T.] Mass of Clackamas county a short while later. She is held in the county jail at Oregon City." Image note: The name “Mrs Pearl Billings” and the number 18 in a circle are written on the negative and are visible on the right side of the image.