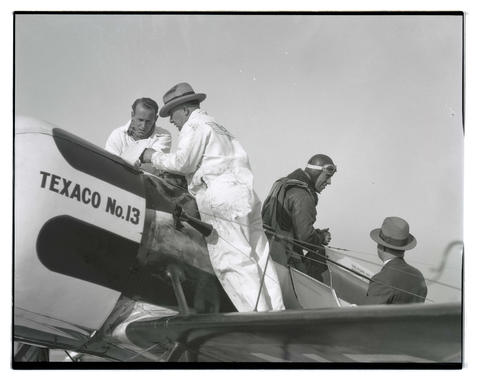 Photograph of two men refueling Captain Frank M. Hawks’ plane as Hawks speaks with an unidentified man at Swan Island airport in Portland on Saturday, January 23, 1932. Hawks made two brief fuel stops in Portland that day while flying from Agua Caliente, Mexico to Vancouver, British Columbia, and back in a successful attempt to set a speed record. A cropped version of this photograph, along with image Nos. 371N1082 and 371N4991, was published on Page 1 of the Oregon Journal on Sunday, January 24, 1932. The photographs were published under the headline “Speed King Refuels Here on Flight.” This photograph had the following caption: “Attendants at the airport refueling the ship while Hawks chatted with bystanders for a few minutes.” The photographs accompanied a story headlined “Hawks Sets Record for 2-Way Dash.” According to the story, Hawks set a round-trip speed record of 13 hours, 43 minutes, 59 seconds.