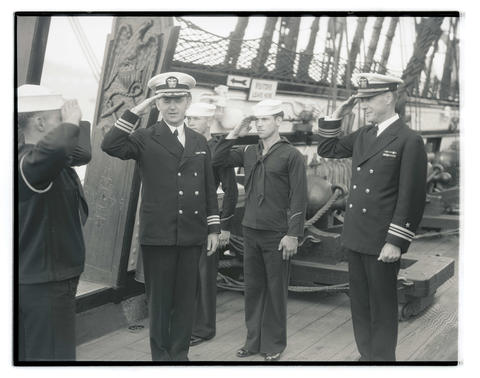 Photograph showing Commander Louis J. Gulliver (second from left), Lieutenant Commander Henry Hartley (right) and unidentified sailors saluting as Gulliver resumes command of the frigate USS Constitution after returning from a 30-day leave. The photograph was taken aboard the Constitution on August 11, 1933, while the ship and crew were in Portland for a three-week visit as part of a national tour. A cropped version of this photograph and image No. 371N3713 were published on Page 4 of the August 11, 1933, under the headline “Piping the Skipper Over The Side.” This photograph had the following caption: “Commander Louis J. Gulliver, left, stepping onto the decks of ‘Old Ironsides,’ with side-boys at salute, and welcomed by Lieutenant-Commander Henry Hartley, who had command of the frigate during Gulliver’s absence on leave. Hartley relinquished command and resumed his duties as executive officer.” The photographs accompanied a story headlined “Gulliver Back As Boss Over Old Ironsides.” The story described the honors for Gulliver as follows: “The side honors accorded the captain consisted of mustering the marine guard, which presented arms as he came across the gangway between the line of four side-boys, who stood at salute while the chief boatswain’s mate blew a rail on his pipe. Lieutenant David W. Tolson, officer of the deck, gave the formal salute as the captain stepped on the deck.” See additional related image No. 371N3718. Image No. 371N3735 may also depict part of the honors marking Gulliver’s return.