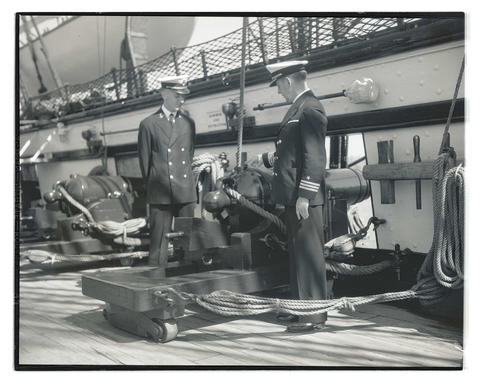 Photograph showing Commander Louis J. Gulliver (right) and his son, Louis J. Gulliver Jr., a midshipman third class, looking at a cannon aboard the frigate USS Constitution. The photograph was taken in Portland on August 11, 1933, after Commander Gulliver returned from a 30-day leave and resumed command of the frigate. The ship and crew were in Portland on a three-week visit as part of a national tour. Gulliver’s wife, son, and three daughters accompanied him to Portland. A cropped version of this photograph and image No. 371N3719 were published on Page 4 of the August 11, 1933, under the headline “Piping the Skipper Over The Side.” This photograph had the following caption: “Commander Gulliver showing a 1933 model midshipman, his son, Louis J. Jr., what a midshipman of 1812 should know about ordnance.” See additional related image No. 371N3718. Image No. 371N3735 may also depict part of the brief ceremonies marking Gulliver’s return.