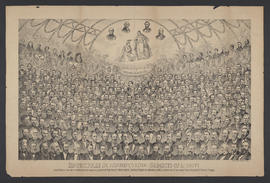 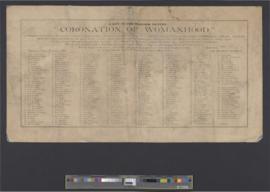 The collection consists of two copies of a poster entitled “Coronation of Womanhood” and a single copy of an identification key to the people depicted in the poster. The posters are printed from a photo crayon lithograph engraving. At the front center of the image, the goddess of Liberty is crowning a kneeling female figure representing womanhood. Below them is a banner reading, “Coronation of Womanhood.” Arranged in a half-circle above Liberty and Womanhood at the top of the poster are the portraits of Edward Dickinson Baker, George Washington, Abraham Lincoln, and James A. Garfield. Flanking either side of the image is a dais draped in bunting featuring the state crests of New York, California, Oregon, Nebraska, Wyoming, and the District of Columbia. Seated at the dais are 17 women of the suffrage movement: Martha C. Wright, Elizabeth Cady Stanton, Lucy Stone, Frances Wright, Lucretia Coffin Mott, Elizabeth Boynton Harbert, Susan B. Anthony, Abigail Scott Duniway, Dr. Clemence S. Lozier, Helen M. Gouger, Sarah L. Knox Goodrich, Mary Ashton Rice Livermore, Mary J. Collins, Julia Ward Howe, Lillie Devereux Black, Matilda Jocelyn Gage, and Ernestine L. Rose. Below the dais, there is an audience of 275 additional men recognized as supporters of women’s enfranchisement. The men depicted in the scene include Matthew Deady, Stephen F. Chadwick, Rockey Preston Earhart, Joseph N. Dolph, Melvin Clark George, Samuel Royal Thurston, and William S. Ladd. A full listing of the depicted individuals is accessible via the identification key. The inscription at the bottom of the poster reads, “Respectfully dedicated to the loyal subjects of liberty who paved the way to woman’s enfranchisement in the Pacific Northwest, United States of America, anno domini one thousand eight hundred eighty three.”

Original posters are not available for direct access due to the fragility and oversized nature of the material. Contact library staff for assistance.

Materials in the collection are in the public domain.