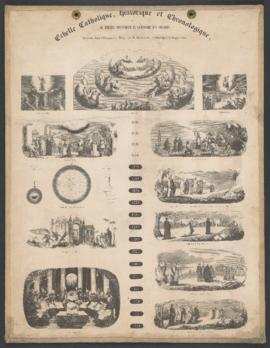 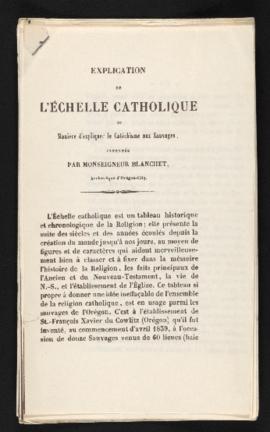 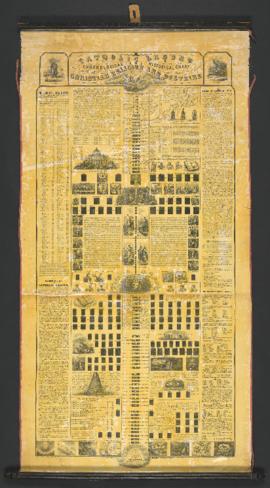 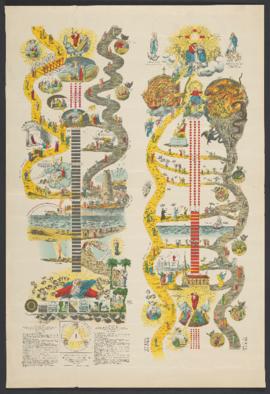 Collection consists of hand-drawn and commercially printed Catholic ladders designed by Francis Norbert Blanchet between 1840 and 1859. The hand-drawn 1840 ladder is believed to have been drawn by Blanchet. The ladder matches extant examples of Blanchet’s handwriting and is addressed to his brother A. M. A. Blanchet at Cedars parish in Canada. Also included in the collection are three printed lithograph ladders with instructions written in French (1846-47 ladder), Spanish (1856 ladder), and English (1859 ladder). There are also photostatic copies of two additional early examples of Blanchet ladders. The collection also includes one Pictorial Catechism printed in 1896 that was designed by Albert Lacombe based off Blanchet’s ladders.

Collection is in French, English, and Spanish.

Father Francis Norbert Blanchet was a French-Canadian Catholic priest who arrived in Oregon Country as a missionary in 1838. Blanchet designed the first Catholic ladder in 1839 as a tool for Christian evangelization. The ladders are visual teaching aids that use symbols and illustrations to represent concepts and important events in Catholic theology and history. The ladder design originated with the Sahale stick, a carved wooden catechism, which Blanchet designed in 1838 while working at the Cowlitz Mission (in present-day Lewis County, Washington). Sahale stick is a Chinook Jargon term which translates to, “stick from heaven.” The update to the long, paper design allowed the ladders to be rolled or folded into panels for easier portability. Blanchet and other missionaries used the ladders as an instructional tool for Christian evangelization to Native American and French métis communities. The ladders were a popular tool among missionaries globally during the later half of the nineteenth century as an aid for teaching about religion across language barriers. In 1872, Father Albert Lacombe expanded upon Blanchet's design. Lacombe was a French-Canadian Catholic priest and missionary who evangelized among Cree and Blackfoot First Nations in Northwest Canada. He developed a more elaborate version of the Catholic ladder, which he called the Pictorial Catechism. Lacombe produced further editions of Pictorial Catechisms, which were distributed globally throughout the late nineteenth and early twentieth centuries.

Online collection is only a selection of materials from the full collection. More information about this collection can be found here: http://archiveswest.orbiscascade.org/ark:/80444/xv14266/