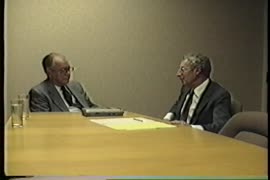 Video. This oral history interview with Bob Christ was conducted by Jack G. Collins on September 28, 1990, with introductory comments by William F. White. White introduces the recording with the title "The Mover for the Shakers." In the interview, Christ briefly describes his early life in Portland, Oregon; his education; and his early career as a lawyer. He then discusses how he began his career as a law clerk at the U.S. District Court of Oregon in Portland, including his initial conversation with George Juba; assembling his staff; and the duties of the job. Christ talks about the procedures of the District Court and about judges he worked with, particularly Gus Solomon. He also talks about the transition to the digital age and other changes to the court. He closes the interview with an anecdote about finding what he thought was a bomb in the court bathroom, and the story of the impeachment of Judge Harry Claiborne of Nevada.