Item 375A1004 - Charles Hill after fighting fire in Cascade Locks 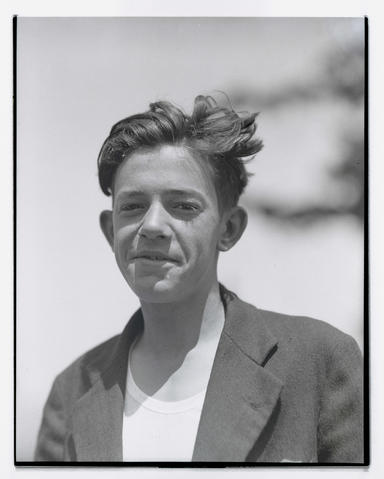 Head and shoulders portrait, taken outdoors, of Charles Hill, 17, facing front. The photograph was taken on July 3, 1934, after Hill helped to fight a fire in Cascade Locks, Oregon. The fire, started by fireworks on Monday, July 2, 1934, during a July Fourth celebration, destroyed approximately a block of the downtown business district, according to a story published on the front page of in the Oregon Journal’s July 3 home edition. A cropped version of this photograph and image No. 375A1003 accompanied the story. The photographs were published under the headline “Where Fireworks Took Heavy Toll at Cascade Locks.” This photograph had the following caption: “Charles Hill, 17, recovering after being overcome by smoke while fighting the fire.” Also see image Nos. 372A0731, 372A0734, and 375A1002.