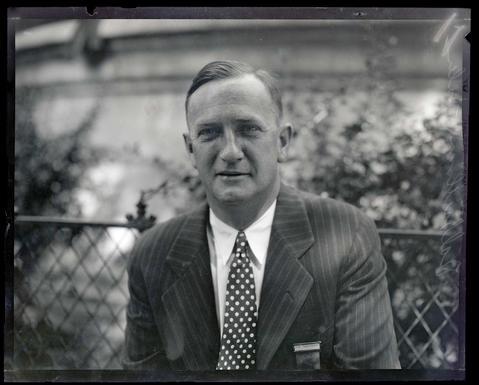 Head and shoulders portrait, taken outdoors, of a man facing front. He is wearing a suit jacket, collared shirt, and tie. A cropped version of this photograph was one of eight that were published on Page 1 of the Oregon Journal on August 8, 1929, under the headline “Legion Hosts Answer Roll-Call At Salem.” The photographs had the following caption: “Oregon’s capital city today and for the rest of the week will be in the hands of American Legionnaires meeting annual state convention.” This photograph had the following additional caption information: “Carl D. Gabrielson, Salem, chairman of the general convention committee, who may be the new state commander or vice commander.” Also see image Nos. 371N0841, 371N0916, 371N1702, and 371N2685, which were published with this photograph, and image No. 371N0915. Image note: The text “Galbrielson [sic] – Salem” and the number 11 are written on the negative and are visible on the right side of the image.