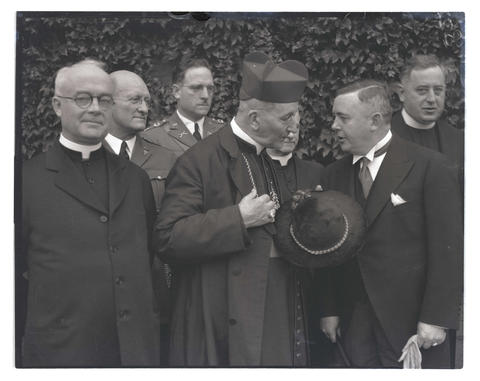 Portrait, taken August 11, 1934, of Cardinal Alexis Henri Marie Lépicier (front, center) and members of his party at Union Station with some of the people who welcomed them to Portland. Lépicier and other clergy traveled to Portland to attend the Marian Congress from August 12-15, 1934, at the Sanctuary of Our Sorrowful Mother (The Grotto). At left is the Most Rev. Edward D. Howard, archbishop of Portland; second from left is Colonel W. G. Scott; at center is Cardinal Lépicier; second from right, speaking to the cardinal, is Portland Mayor Joseph K. Carson; and at right is the Rev. A. M. Mayer, rector of the Sanctuary of Our Sorrowful Mother. A cropped version of this photograph, along with image No. 371N4215, was published on Page 1 of the Oregon Journal on August 11, 1934. The photographs were published under the headline “Distinguished Catholic Prelate Welcomed to City.” This photograph had the caption: “Cardinal Lepicier listening intently to the mayor’s words of welcome.” Image note: The number 32 is written on the negative and is visible in the upper right corner of the image.