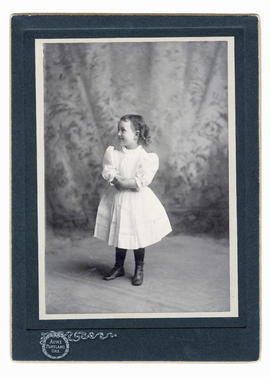 Photograph of Henrietta Chase Failing as a child, daughter of James F. Failing and Jane (Conner) Failing. She is smiling and looking towards her right. 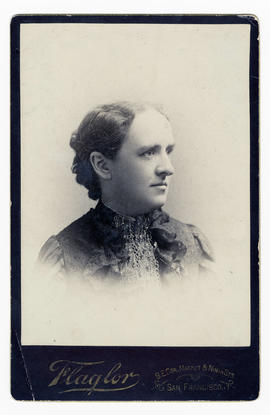 Photograph of Jane (Conner) Failing, looking towards the right side of the frame. Her hair is pulled back, and a decorative neckline can be seen on her dress. 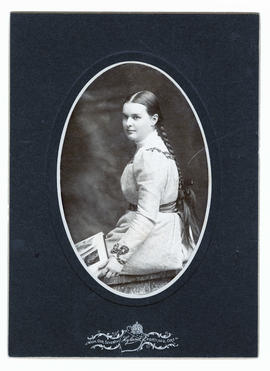 Photograph of Kate Whittlesey Failing, seated and holding a book while facing away from the camera. Long braids can be seen along her back. 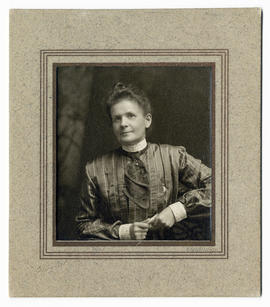 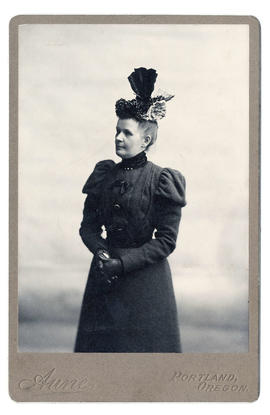 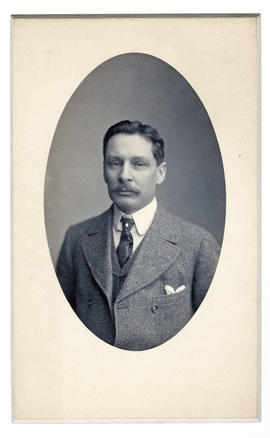 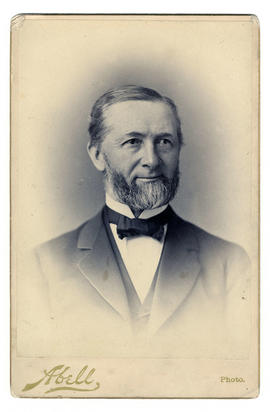 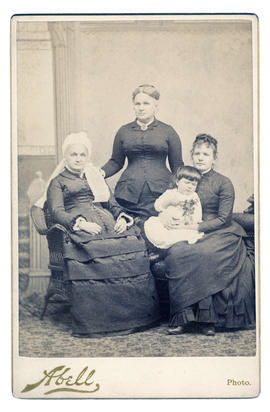 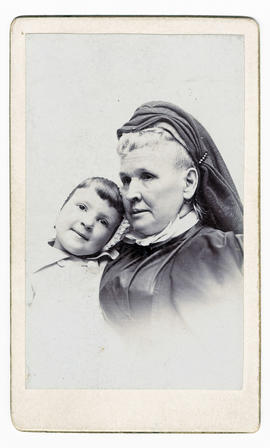 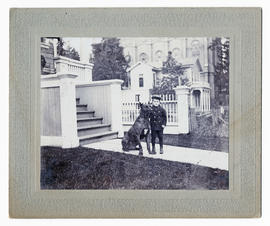 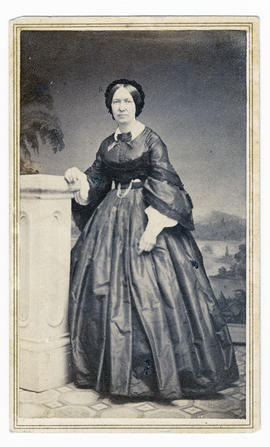 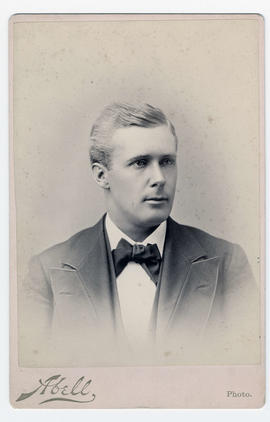 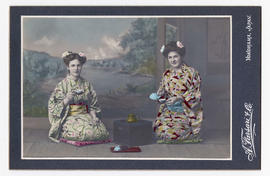 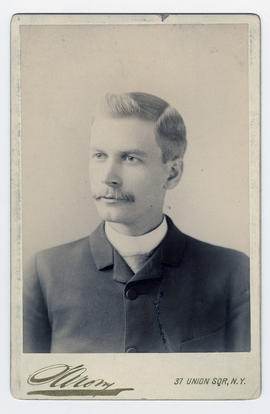 Cartes- de- visite are a form of card photograph popular from around 1860 to the early 1900s, typically used for portraiture. The common construction of these cards consists of a thin albumen print mounted on a thicker card backing measuring 2.5 x 4 inches. André Adolphe-Eugène Disdéri patented the process of creating these photo cards in Paris in 1854, streamlining the process of commercial portraiture. Cartes- de- visite were traded among friends and visitors and they were popularly displayed in albums. In the United States, cartes- de- visite were a staple of commercial photographers during the Civil War as a means of selling inexpensive portraits of soldiers and their loved ones. Photographs of celebrities, military, and political figures were also popular for collecting and trading. Cartes- de- visite were superseded by Cabinet cards, a similar, larger format of roughly 4.5 x 6.5 inches, in the 1870s, but they remained popular into the 20th century.

This artificial collection was accumulated from accessions containing cartes- de- visite photographs acquired prior to 2010 by the Oregon Historical Society Research Library. The cartes- de- visite were originally part of a topical photograph collection and were separated into their own collection to address preservation concerns. The numbering scheme for the collection reflects their original placement within the topical photograph collection. As a result, numbering in this collection is not sequential. The collection includes portraits taken from about 1855 through the early 1900s. Many of the portraits have attached biographical information. Portraits by many well-known Oregon photography studios are represented in this collection, including Joseph Buchtel, Andrew B. Paxton, Isaac G. Davidson, Peter Britt, and F. A. Smith. The collection also contains images of locomotives, ships, buildings, and landscapes in the Pacific Northwest.

Also included is the Photographer Study Collection, which contains sample work from several studios in Oregon, California, and Washington. The portraits in this series are unidentified with the exception of a small selection of portraits that were identified after the collection was assembled.

In addition to Oregon-related materials, the collection includes cartes- de- visite of notable military, political, and celebrity figures from the late 19th century. The most common subjects are American Civil War portraits, a series of illustrations of George and Martha Washington, European notables cards, and advertisements. 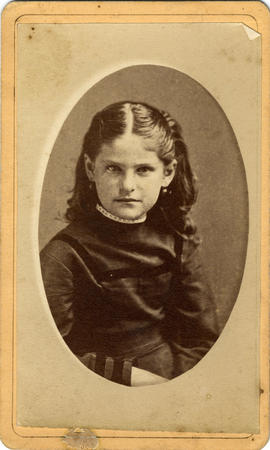 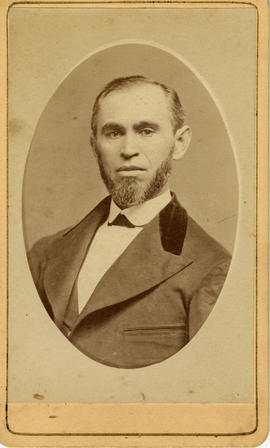 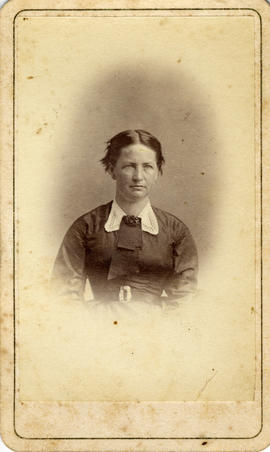 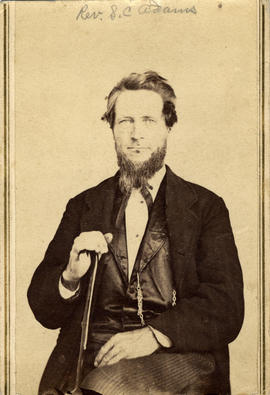 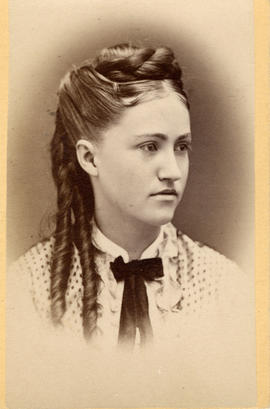 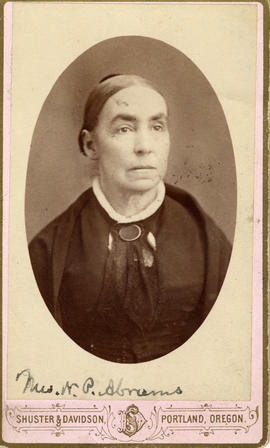 Sarah Lavina Phelps, who married William Penn Abrams. She and her husband were close friends with Seth Pope. 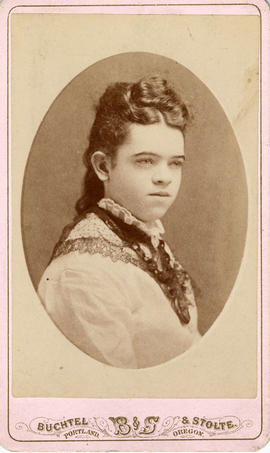 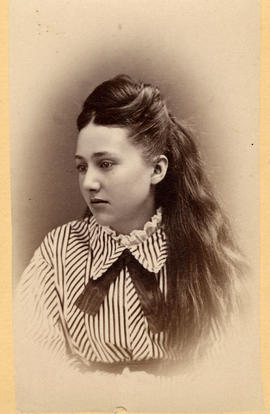 Inez Adair, about 1877. (Identified as Ines Adam on census) 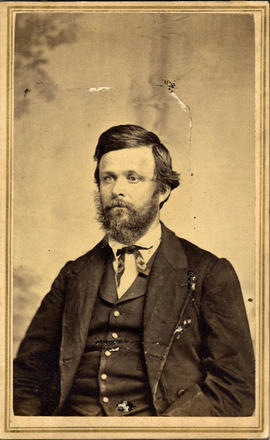 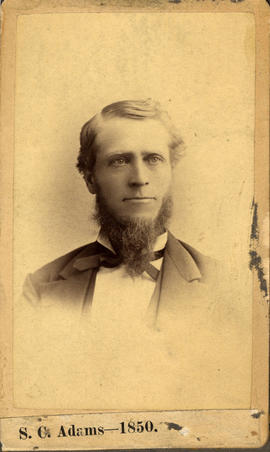 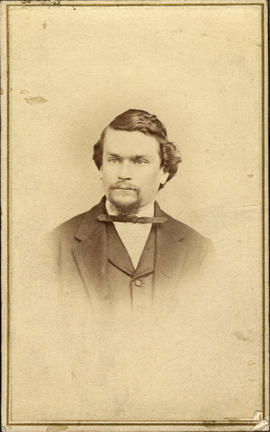 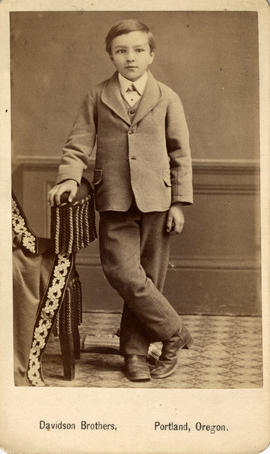 Artist as a boy 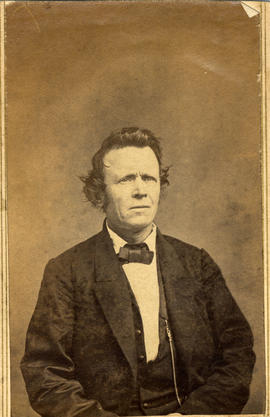