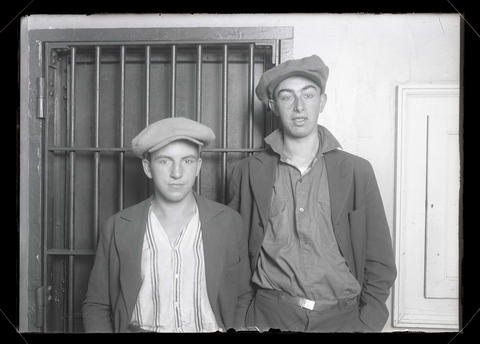 Half-length portrait of two young men or teenage boys standing outside the barred door of a jail or prison cell and facing front. Written on the negative sleeve is the text “Murray, Mr and Lesmeier, Mr / Auto bandits.” The young men are probably Lawrence H. Murray and Ben Lesmeister of Portland. According to an article in the Oregon Journal on Saturday, July 17, 1920, Murray, Lesmeister, and a third young man, Lee B. Vale, were charged with stealing a car in interstate commerce and pleaded guilty. The Journal reported that Murray, Lesmeister, and Vale broke into a garage, stole a car, and drove it to Seattle, Washington, and back.