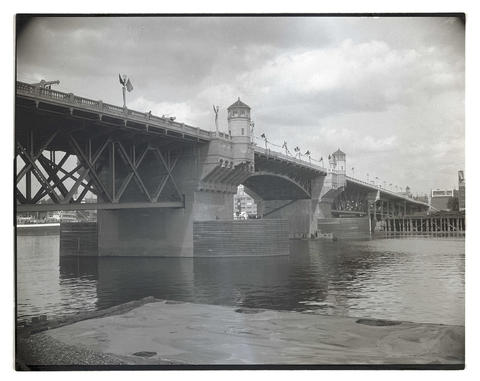 Burnside Bridge decorated with flags for dedication ceremony, May 1926

Photograph, taken from the west side of the Willamette River, showing the Burnside Bridge decorated with flags for a dedication ceremony celebrating the bridge’s opening. A cropped version of this photograph was published on the front page of the Oregon Journal on Friday, May 28, 1926, the day of the ceremony. The photograph had the following caption: “Much Water Should Run Under This Great Bridge Before It Falls.” The photograph had the following caption: “City celebrates today in honor of opening of Burnside street structure, which, with its approaches, will cost $4,500,000. Regular traffic will be permitted after 7 o’clock tonight, and the afternoon in the meantime is given over to parades, speeches, and loud cheers for the grater elbow room permitted trans-Willamette traffic and the opportunity for commercial development produced by this facility for rapid connection between East and West Sides.” The photograph accompanied a story headlined “County and State Unite With City in Bridge Dedication.” Image note: Photograph shows discoloration due to deterioration of the negative.