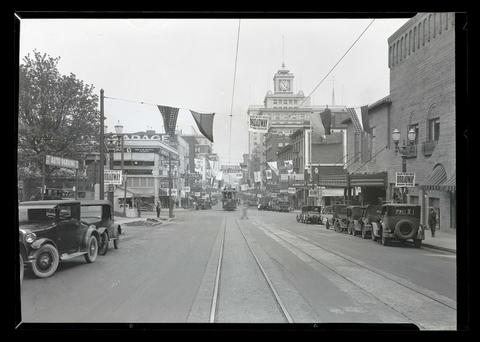 Photograph, taken from the center of the street, looking north up Broadway (now Southwest Broadway) in Portland. The photograph shows an oncoming streetcar at center and buildings and parked cars along the street. Banners are hanging above the street, and signs posted on each lamppost along Broadway read: “FOLLOW THE ROSY PATH TO / BROADWAY / BROADWAY THEATRE DAY / AUG. 27.” A cropped version of this photograph was published on Page 6, Section 2, of the Oregon Journal city edition on Thursday, August 26, 1926. It was published under the headline “Portland’s Own Bright Way.” The photograph had the following caption: “Broadway, looking north from Main street, showing the entrance of the new $1,000,000 Broadway theatre at the right and The Journal building in the right background. This street will be the scene of the Mardi Gras celebrating the opening of the theatre Friday night.”