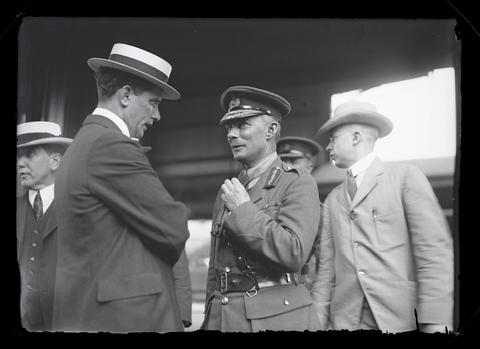 Photograph showing Brigadier General W. A. White of the British army (right) speaking to an unidentified man at Union Station in Portland on Wednesday, August 15, 1917. The photograph was taken after White and his party arrived in Portland as part of an effort, led by White, to recruit British citizens in the United States for military service in World War I. A story about White and image No. 376G0222, depicting the general and his party, were published on Page 16 of the Oregon Journal on Thursday, August 16, 1917. Also see additional related image No. 376G0220. Image note: The text “White, General and staff” is written on the negative sleeve.