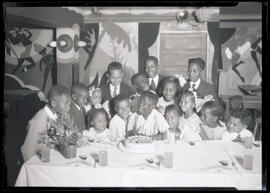 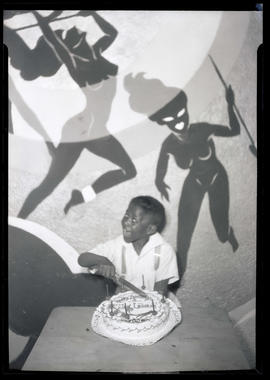 Portrait of a boy, Teddy McDaniel, sitting at a table and posing with his birthday cake during a party at the Cotton Club in Portland on May 23, 1934. McDaniel is smiling and holding a knife as though about to cut the cake. A cropped version of this photograph was published on Page 12 of the Oregon Journal on May 25, 1934. It had the following caption: “Teddy McDaniel, pal of Ted Lewis and hit of the latter’s show at the Oriental, cutting the cake that made his eighth birthday anniversary, Wednesday, the best ever.” According to a short story accompanying the photograph, McDaniel was a performer in stage shows led by entertainer Ted Lewis, and Lewis was among those to attend the party. See related image No. 371N1517. Image note: Photograph is out of focus. 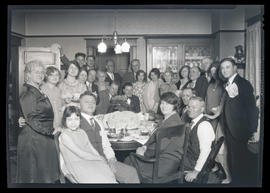 Photograph showing a group of unidentified people posing around a table with a cake in the center. On the cake are the words “Birthday Greetings to Minnie.” 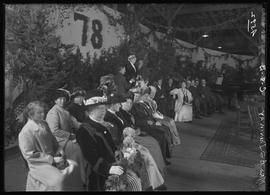 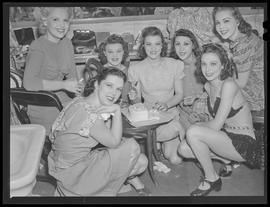 A group of women pose backstage at the Orpheum Theatre next to a low table, on which sits a small cake. One of the women is wearing a two-piece stage costume. Pictured: Lorraine Lyons, Arline Hennings, Violet Maguire, Dale Adams (whose birthday it is), Sue Mae Lee, Bobbye Renee, Mitzi Haase (negative 3 of 15).