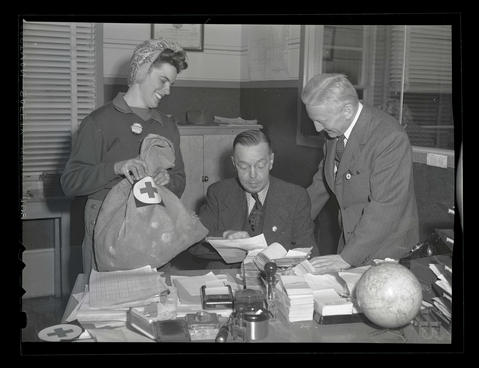 Photograph showing (from left) Ruth Sanders and H. W. Erren of Albina Engine & Machine Works with Berkeley Snow of the Red Cross on March 17, 1943, when Sanders and Erren gave Snow a $10,125 donation from the Portland shipyard to the Red Cross war fund campaign. Sanders, an electrician’s helper, is holding a bag with the Red Cross emblem on the front. Erren, Albina Engine’s treasurer, is sitting at a desk and showing the list of contributors to Snow, the vice chairman of the fundraising drive, who is standing next to him. A similar photograph, image No. 375A0748, and a story about contributions to the drive were published on Page 11 of the Oregon Journal’s final edition on Wednesday, March 17, 1943. Image note: The number 235 is written on the negative and is visible in the lower right corner of the image. The text “Albina shipbuilding” is written on the negative sleeve.