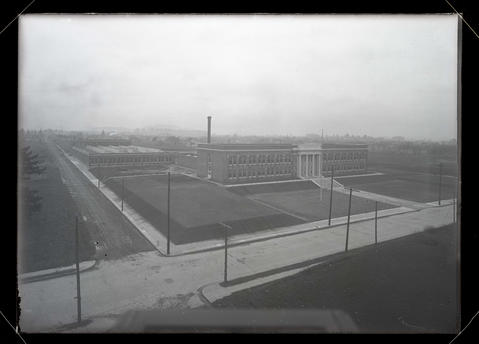 Photograph, taken from a high angle, showing the exterior of a new Benson Polytechnic School building and the surrounding grounds at what is now Northeast 12th Avenue and Northeast Irving Street in Portland. The school is now known as Benson Polytechnic High School. A cropped version of either this photograph or a nearly identical image, No. 376G0355, was published on Page 10, Section Two, of the Oregon Journal on Sunday, December 30, 1917. The photograph was published under the headline “New Plant of Benson Polytechnic School For Boys.” It had the following caption: “The Benson Polytechnic school, one of the finest institutions of its kind, now occupies its new plant at East Twelfth and East Couch streets, where excellent facilities are afforded for teaching the skilled trades.” A story on the same page, headlined “Portland’s Library And Public Schools Awake to Times / Public Schools Fully Meet Demands Imposed by War” included the following information about the school and new building: “The Benson Polytechnic school for boys, now housed in its new plant, is the finest institution of its kind on the Pacific coast. When fully completed the school will consist of 10 units. The subjects taught include many of the practical phases designed to fit the students to battle with the technical world. The enrollment is now 500 and the capacity of the school is 2000 when all units shall have been finished.” Also see related image No. 376G0353. Image note: The text “Benson Polytechnic School” is written on the negative sleeve.