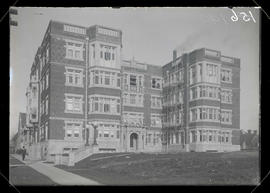 Photograph showing the exterior of a five-story brick apartment building, Belle Court, on Trinity Place off Washington Street (now Northwest Trinity Place off West Burnside Street) in Portland. A cropped version of this photograph and image No. 376G0187 were published on Page 4 of the Development Section in the Oregon Journal Year’s End Number on Friday, December 26, 1913. The photographs were published under the headline “Portland’s Apartment House Colony On The Increase.” This photograph had the following caption: “Belle Court apartments, Trinity Place.” The photographs accompanied a story, which had the headline “Apartments Rise to Fulfill Demands of Growing Population” and the subheading “Seven Hundred Thousand Dollars Invested in Flats and Apartment Houses in 1913.” The story contained the following information about Belle Court: “This new building, recently opened, cost about $100,000.” Image note: The number 140 is written on the negative. The number 156 was also written on the negative, then crossed out.