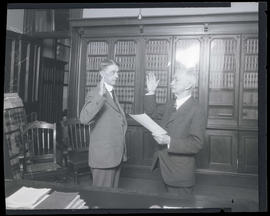 Photograph of Judge Robert S. Bean (right) and John H. McNary, each with one hand raised as Bean administers the oath of office to McNary in the courtroom of the federal building in Portland on March 7, 1927. McNary joined Bean as a member of the United States District Court for the District of Oregon. A cropped version of this photograph was published on Page 1 of the Oregon Journal’s March 7 edition under the headline “New Judge Takes Bench.” The photograph had the following caption: “John H. McNary of Salem taking oath today as successor to late Federal Judge C. E. Wolverton. Judge McNary is at left in picture, with Judge Robert S. Bean administering obligation.” The photograph accompanied a story headlined “M’Nary on Bench in Federal Court.” Image note: The text “Judge McNary + Bean” is written on the negative and is visible on the left side of the image.