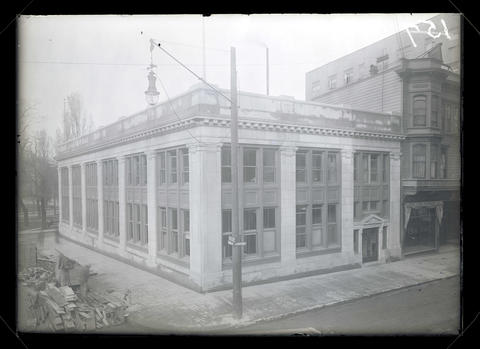 Photograph showing the exterior of the two-story Balfour-Guthrie Building at the corner of Park and Oak streets (now Southwest Park Avenue and Southwest Oak Street) in Portland. A cropped version of this photograph was published on Page 3 of the Development Section in the Oregon Journal Year’s End Number on Friday, December 26, 1913. The image was among a full page of photographs showing office buildings constructed in Portland in 1913. The photographs were published under the headline “Eleven Business Blocks Constructed During Year.” According to information on the page, the Balfour-Guthrie Building was constructed at a cost of $37,000. Image note: The number 141 is written on the negative. The number 157 was also written on the negative, then crossed out. It is visible in the upper right corner of the image.