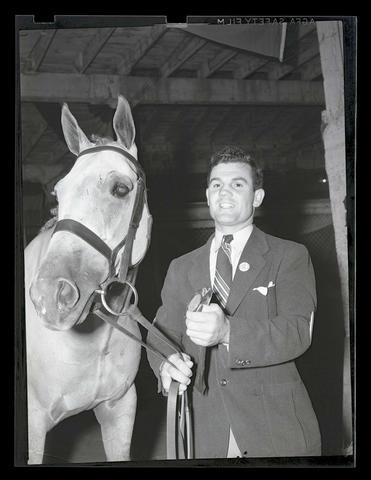 Photograph of a man standing with a horse and holding a prize ribbon at the 1938 Pacific International Livestock Exposition in Portland. A cropped version of this photograph was published on Page 1 of the Oregon Journal on Saturday, October 8, 1938, under the headline “Won $1000 Journal Stake.” The caption for the photograph was: “Sky Crown, handsome animal owned by B. C. Tremaine of Los Angeles, which won The Journal’s $1000 stake Friday night when judged best hunter. Hank Foley put the horse through its paces.” Also see image Nos. 374N1167 and 375A0010.