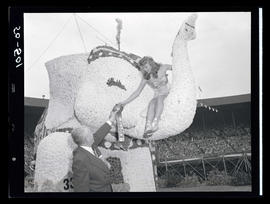 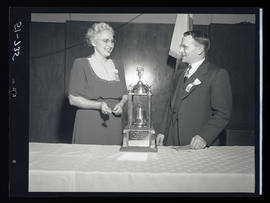 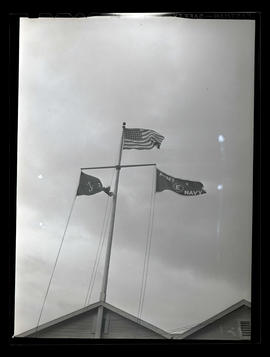 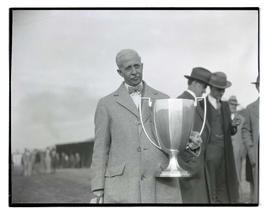 Photograph of an unidentified man holding a large cup-shaped trophy. The photograph may have been taken at the annual Pacific International Livestock Exposition in Portland. 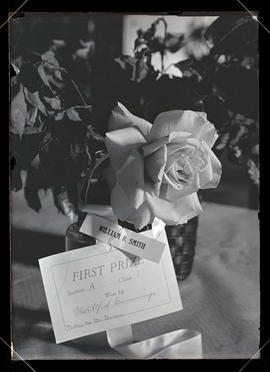 Portrait of a rose in a vase. Attached to the vase is a label identifying the rose species, “William R. Smith,” and a card with the text “First Prize / Section A Class 1 / Won by Mrs Alfred Cummings / Trophy By Mr. Meikle.” 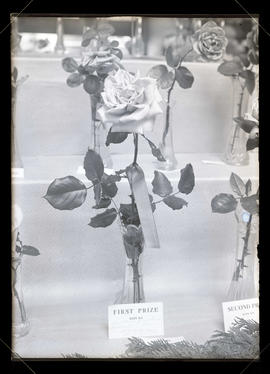 Photograph of a rose in a vase, displayed on a tier with other roses. At the bottom of the vase is a label with the following text: “FIRST PRIZE / WON BY / Best bloom from Garden / Section A Class 1 / T E Wallace / 261 N. 26th St.” A tag lying in front of the vase is labeled “Joseph Hill,” the name of the rose species. 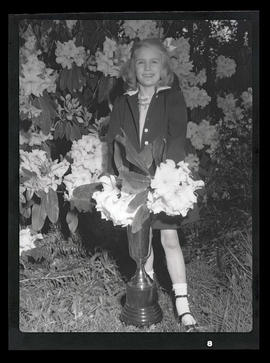 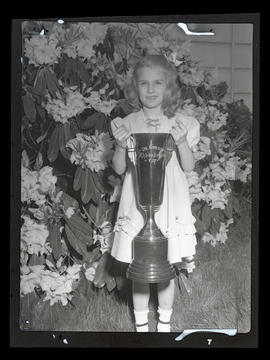 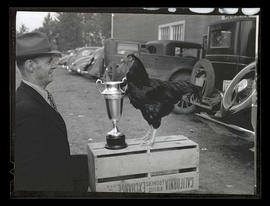 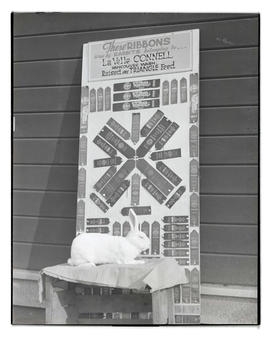 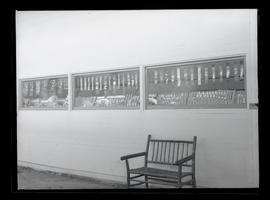 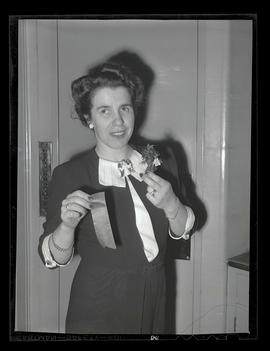 Photograph showing an unidentified woman holding a tiny vase of flowers in one hand and a prize ribbon in the other. Visible on the ribbon are the words “Journal” and “Flower Show,” and the date 1944. This photograph may be related to image No. 375A0980. 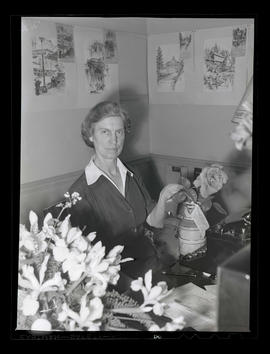 Photograph showing an unidentified woman sitting at a typewriter. On the desk in front of the typewriter is a rose in a vase. The woman is holding a ribbon, probably a prize ribbon. Attached to the rose is a label bearing the words “Journal Flower Show” and a date that may be 1944. 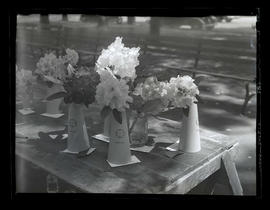 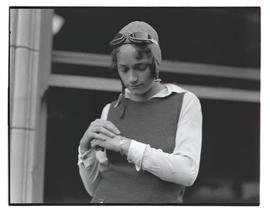 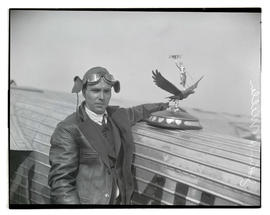 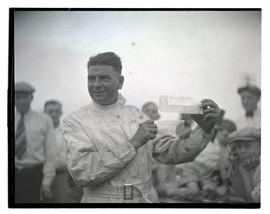 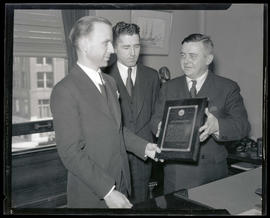 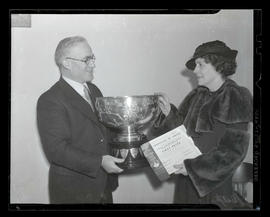 Half-length portrait showing a man and woman facing each other and holding a large cup-shaped trophy. The woman is holding a certificate with a first-place ribbon from the National Rose Show attached to it. On the certificate is the following text: “CERTIFICATE OF AWARD / America’s First National Rose Show / CALIFORNIA - PACIFC INTERNATIONAL EXPOSITION / SAN DIEGO, CALIFORNIA, OCTOBER 12-13, 1935 / FIRST PRIZE / Awarded to Mrs. Cyrus Dolph / 25 blooms for the Nicholson Challenge Bowl.” The certificate bears signatures from people associated with the California-Pacific International Exposition Company and the San Diego Rose Society. Image note: The name “Dolph” is written on the negative and is visible in the lower right corner of the image. 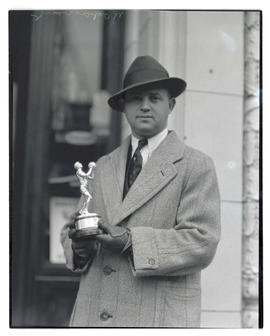 Portrait of a man holding a basketball trophy. The man is wearing an overcoat, gloves, hat, and tie. The name “Rogaway” is written on the negative and is visible at the top of the image. 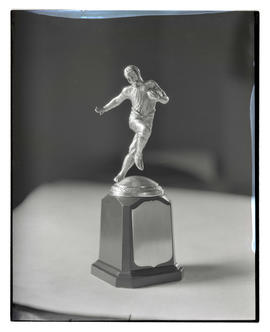 Photograph of a football trophy. The trophy consists of a figure of a player mounted on a base; the figure is holding a football and holding one arm out in a block. The plaque on the front of the base is blank. Image note: Photograph shows discoloration due to deterioration of the negative. 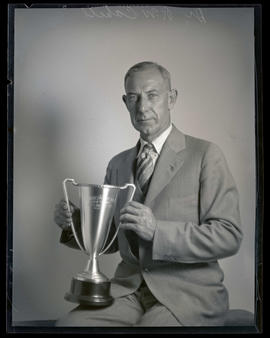 Portrait of a man in suit and tie, seated on a bench and holding a trophy. The words “American Legion Golf Trophy,” and “Portland Post” are visible on the trophy. The name “Dr R. W. Cahill” is written on the negative and is visible at the top of the photograph. Image note: Photograph shows discoloration due to deterioration of the negative. 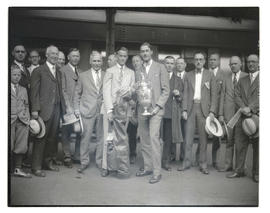 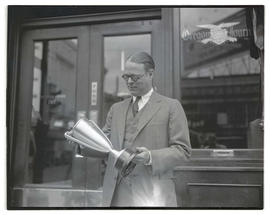 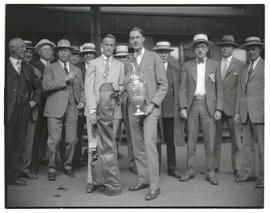 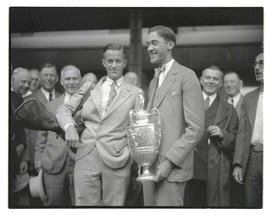 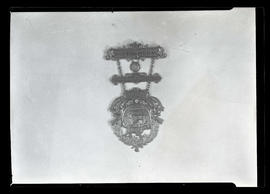 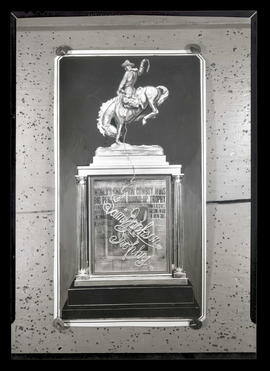 Photograph of a picture of a trophy. On the top of the trophy is a figure of a cowboy on a bucking horse. The cowboy’s rope trails down the front of the base, where it spells the words “Sam Jackson Trophy.” On the front of the base is an image of a mock Oregon Journal front page, with the text “WORLD’S CHAMPION COWBOY WINS BIG PENDLETON ROUND-UP TROPHY / WINNER RECEIVES HANDSOME AWARD FOR ARENA SKILL.” Charles Samuel (Sam) Jackson was the owner of the East Oregonian newspaper in Pendleton; he took over the Oregon Journal in 1902.