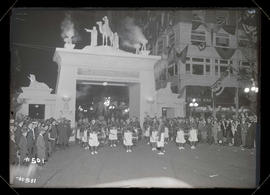 Photograph showing the drum corps of the Moolah Shriners of St. Louis passing under a large arch at Sixth and Alder streets (now Southwest Sixth Avenue and Southwest Alder Street). Sixth Street is lined withs spectators. The arch is topped with smoking braziers and three statues, one of a person riding a camel and two others standing alongside. On the front of the arch are the words “ES SELAMU ALEIKUM — ALEIKUM ES SELAMU.” The photograph was taken on Wednesday, June 23, 1920, during a night parade that was part of the Shriners convention held in Portland that year. A cropped version of this photograph was published on Page 2 of the Oregon Journal city edition on Thursday, June 24, 1920, under the headline “Moolah Patrol (St. Louis) At The Shrine Arch Last Night.” The photograph accompanied a story about the parade, headlined “Parade Is Marvel of Beauty; Drills Amaze Spectators.” Image note: The text “#501” is written on the negative twice and is visible in the lower left corner of the image. The text “Shriner’s Arch / 6th & Morrison [sic] / Moolak [sic] Drum Corps” is written on the negative sleeve. 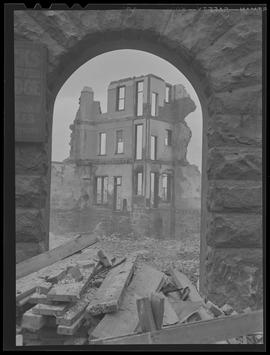 Photograph looking through a stone archway, showing the side of a demolished building. A stack of wood is in the foreground of the frame, and stacks of bricks and debris can be seen (negative 5 of 17). 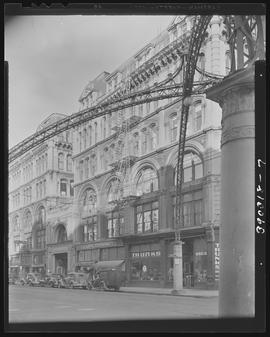 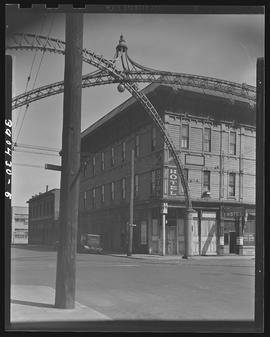 The Great Light Way arch over the intersection of NW Third Avenue and Everett Street. The International Hotel, located at 324 NW Third Avenue, is in the background. A sign advertises room for $1.25 or $2.00 for two men. Also a sign for Hinode Pool Room. Taken April 30, 1939. 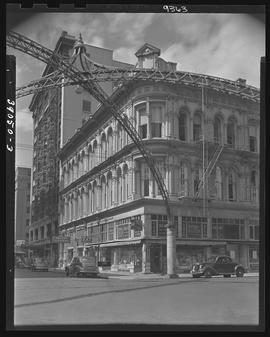 The Great Light Way arch over the intersection of SW Third Avenue and Oak Street. Ainsworth Bank Building in the background. Signs at the drugstore include “Bromo-Seltzer for Headaches,” and “Shur-Shot Corn Remedy.” Also signs for “Tailors/Cleaners” and “Eat Walt’s Lunch.” Taken May 4, 1939.