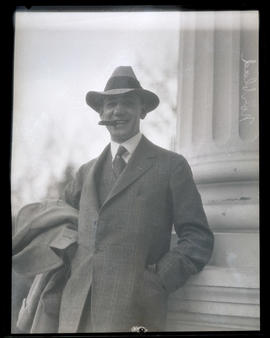 Half-length portrait of A. W. Norblad standing outside the Oregon State Capitol, facing front, and smiling. He is wearing a suit, hat, and tie. He has a cigar in his mouth and is standing with one hand in his jacket pocket. The name “Norblad” is written on the negative and is visible on the right side of the image. 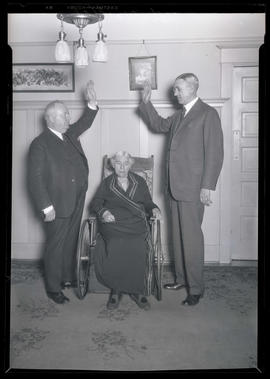 A. W. Norblad being sworn in as Oregon governor with mother in attendance

Photograph showing Gus. C. Moser (left) and A. W. Norblad (right) facing each other, each with his right hand raised, as Moser administers the oath of office to Norblad following the death of Oregon Governor Isaac L. Patterson. At center, sitting in a wheelchair, is Norblad's mother, Betty Norblad. A cropped version of this photograph was published on the front page of the Oregon Journal on Monday, December 23, 1929, under the headline “Governor Norblad Takes Oath of Office.” The photograph had the following caption: “Senator Gus C. Moser (left) swearing in Senator A. W. Norblad (right) who, as president of the senate, becomes governor of Oregon, succeeding the late Governor Patterson. Mrs. Betty Norblad, the new governor’s mother, sits between them. The ceremony took place Sunday afternoon at Mrs. Norblad’s home, No. 67 Shaver St.” Image note: The name “Al Norblad” is written on the negative. Also see related image No. 371N1885. 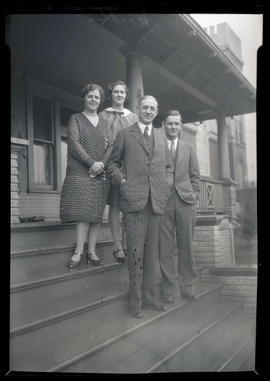 Portrait of the Norblad family on the front steps of the home of A. W. Norblad’s mother, sister, and brother-in-law at 67 Shaver Street in Portland. The photograph was taken on Sunday, December 22, 1929, when Norblad was sworn in as Oregon governor at the Shaver Street home following the death of Isaac L. Patterson. A cropped version of this photograph was published on Page 15 of the Oregon Journal on Monday, December 23, 1929, under the headline “New Governor’s Family.” The photograph had the following caption: “Albin W. Norblad, new governor of Oregon, and his family, photographed on the steps of the governor’s mother’s house in Portland Sunday. In the rear are Mrs. Norblad and Miss Eleanor Lyle Norbland; in front are Governor Albin Norblad and Albin W. Norblad Jr. The daughter is a student in Astoria high school, the son a student at the University of Oregon.” Image note: The name “Al Norblad” is written on the negative and is visible at the top of the image. Also see related image Nos. 371N1884 and 371N4176.