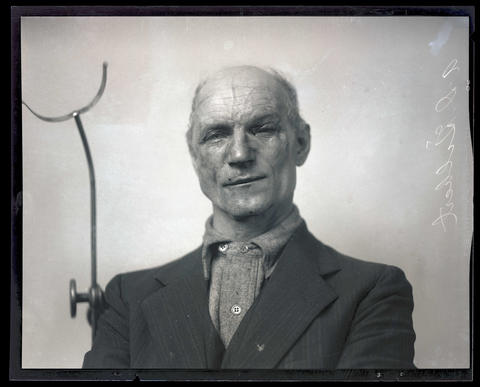 Head and shoulders portrait of mill worker and murder suspect A. D. Glibert. A cropped version of this photograph was published in the Oregon Journal on February 28, 1931, and again on March 1, 1931. On February 28, the photograph was published on the Journal’s front page under the headline “Grudge Leads to Murder.” The photograph had the following caption: “Albert D. Glibert, who today shot and killed John W. Bevis, superintendent of the Inman Poulsen mill, because he blamed Bevis for his discharge. Glibert then turned his weapon on Bevis’ assistant, George W. Martin, and inflicted serious injury.” The photograph accompanied a story headlined “Mill Boss Slain, Aide Badly Shot.” On March 1, the photograph was published on Page 2 of the Oregon Journal with image No. 371N3218, depicting a note that Glibert wrote before the shooting. On that day, this photograph had the following caption: “Taken by a Journal staff cameraman a few minutes after Glibert was overpowered by fellow employees.” Later, on July 30, 1931, the Journal reported that Glibert had pleaded guilty to second-degree murder and was sentenced to life in prison. The Journal reported that the plea followed a trial on first-degree murder charges in which the jury was unable to agree on a verdict. Image note: The name “A. D. Gilbert [sic]” is written on the negative and is visible on the right side of the photograph. Image note: The photograph shows discoloration from deterioration of the negative.