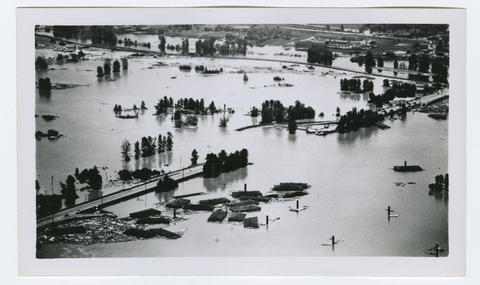 An aerial photograph of flood waters during the Vanport flood. Several apartment buildings that were lifted from their foundations by the water are visible among other debris in the lower left corner of the image. Vanport City, once the second largest city in Oregon, was destroyed by a flood on May 30, 1948 when water breached a nearby section of the dike along the Columbia River. This photograph was part of a series of selected snapshots of "Vanport City, Ore. Destroyed by the Mighty Columbia River," sold as a set after the flood.