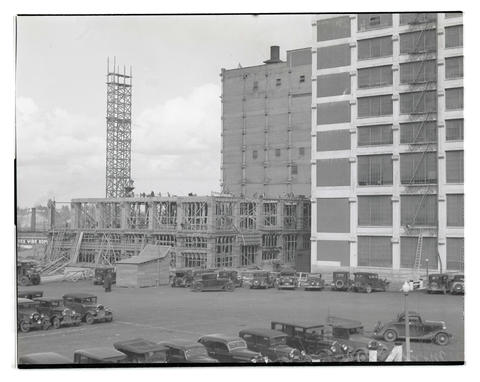 Photograph showing an addition under construction at the Montgomery Ward warehouse in Portland in March 1936. A cropped version of this photograph was published on Page 5, Section 2, of the Oregon Journal on Sunday, March 29, 1936, under the headline “Pouring Third Floor Block at Ward’s.” The photograph had the following caption: “Building activity is at high gear on this $750,000 project at Montgomery Ward & Co. mail order and retail center at N. W. 27th avenue and Vaughn Street, as 150 men push the nine-story addition into the air.” The photograph accompanied a story headlined “Montgomery Ward Project On Schedule.” Image note: The text “Mont - Ward 3/26/36” is written on the negative and is faintly visible in the lower right corner of the image.