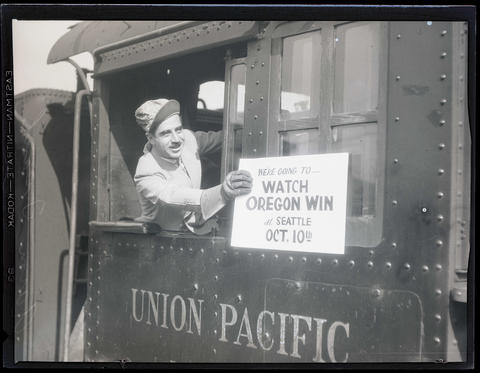 Portrait of Aaron Frank, wearing a train engineer's hat and glove, leaning out the window of a locomotive and holding a sign that reads: “We’re going to watch Oregon win at Seattle Oct. 10th.” A cropped version of this photograph was published on Page 22 of the Oregon Journal on October 7, 1931, under the headline "Not Casey Jones at Throttle." The photograph had the following caption: "It is Aaron Frank, who is engineer of the 'Watch Oregon Win at Seattle Committee' in the cab of a Union Pacific train. Frank and the Portland Junior Chamber of Commerce are endeavoring to pilot a large crowd of Portlanders to the Oregon-Washington [football] game at Seattle next Saturday." The name “Aaron Frank” is written on the negative and is faintly visible on the left side of the image.