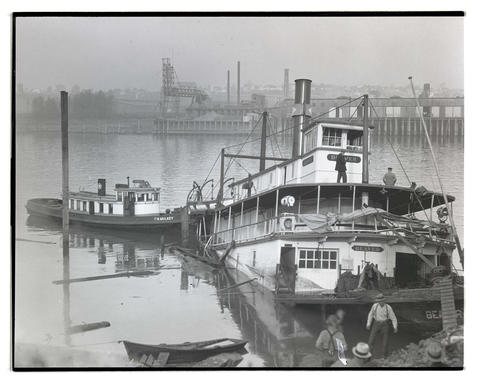 Photograph of the river steamboat Beaver beached and partially submerged in the Willamette River in Portland on November 24, 1931. To the left of the Beaver is the F. W. Mulkey, a harbor patrol tugboat. The Beaver was hit by an ocean steamer, the Admiral Farragut, while unloading cargo at the Admiral Line terminal. None of the Beaver’s crew were injured. A similar photograph was published on Page 1 of the Oregon Journal on Tuesday, November 24, 1931, with a story headlined “Ships Crash in River and One Beached.” Also see image Nos. 371N5191 and 371N5192.