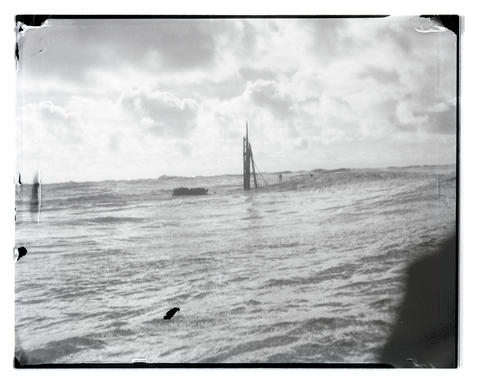 Photograph, taken Monday, January 13, 1936, of the top of the steamship Iowa’s mast after the ship wrecked in a storm near the mouth of the Columbia River on Sunday, January 12. A cropped version of this photograph was published on Page 1 of the Oregon Journal on Tuesday, January 14, 1936, under the headline “Waveswept Masthead of the Iowa, Bleak Marker of Grim Sea Disaster.” The photograph had the following caption: “Closeup of visible remains of the sturdy States’ line steamer, pounded into the sands of Peacock Spit, taking lives of 34 men on board early Sunday morning. Photograph taken by Ralph Vincent, Journal cameraman, from the 38-foot lifeguard boat from Fort Canby coast guard station which braved gigantic swells Monday to search for bodies near the wreck.” The photograph accompanied two stories: one about the wreck, headlined “Rain, Seas Stall Hunt for Bodies,” and another about the photographer’s experience, headlined “Journal Cameraman Finds Iowa Trip Exciting.” Image note: Damaged negative.