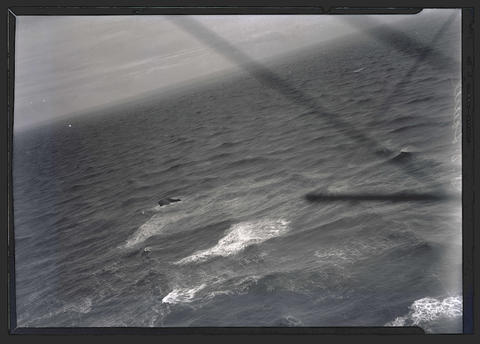 Aerial photograph of the wreckage of the steamship Laurel after it struck Peacock Spit near the North Jetty at the mouth of the Columbia River. According to reporting in the Oregon Journal, the ship, carrying a load of lumber, encountered high seas from a gale as it left the river on Saturday, June 15, 1929. Around 2:30 or 3 a.m. on Sunday, June 16, the ship struck a sandbar and broke in two. One crew member, Russell Smith, died when a wave swept over the ship and he was washed overboard. Rescue boats retrieved the remaining crew members on June 16 and June 17, except for the captain, Louis Johnson, who initially refused to leave. He was rescued on Wednesday, June 19. A photograph similar to this one was published with several others on Page 10 of the Oregon Journal on Tuesday, June 18, 1929. The photographs appeared under the headline "Exclusive Photographs of Wrecked Steamer Laurel and Her Crew." Image note: The text “S. S. Laurel” is written on the negative and is visible on the right side of the photograph.