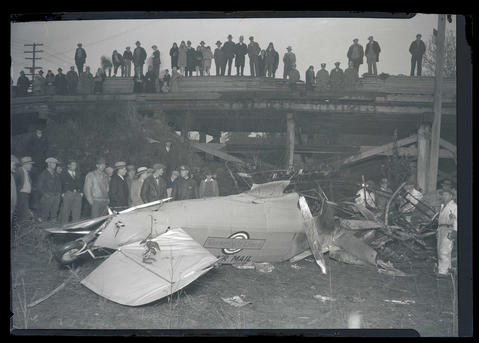 Photograph of a crowd looking at the wreckage of a plane near the port dock in Vancouver, Washington, on Saturday, November 30, 1929. A cropped version of this photograph was published on Page 2 of the Oregon Journal on Sunday, December 1, 1929, under the headline “Fog Claims Another Plane Victim.” The photograph had the following caption: “Wreckage of Varney Air Lines mail plane which spun to the ground at Vancouver Saturday afternoon after nicking the north tower of the Interstate bridge.” The photograph accompanied the continuation of a front-page story about the crash. According to the story, the plane’s pilot, Clarence C. Price, was unable to land at Swan Island airport in Portland because of fog and turned toward Vancouver. A witness reported hearing a loud noise and seeing the plane “carom off the north tower of the bridge and go into a spin.” Three people pulled Price from the burning plane after the crash, the Journal reported, but he died the next day, December 1, 1929. Also see image No. 371N3106.