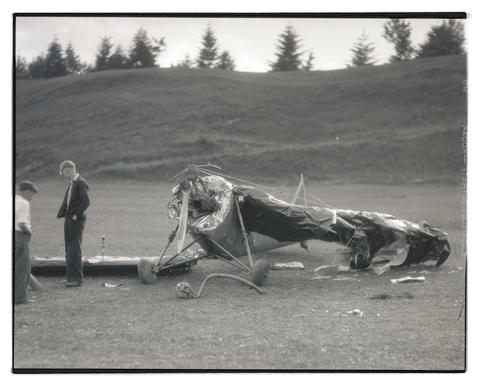 Photograph of two unidentified boys looking at the wreckage of a small Pargon Flying Service airplane after the plane crashed on the West Hills Golf Course in Portland on Tuesday, May 26, 1931. The pilot, Roy H. Scheffel of Portland, was killed. Scheffel ran a cafe called The Rendezvous. On Wednesday, May 27, 1931, the Oregon Journal published a story about Scheffel’s death, headlined “Cafe Man Killed in Air Crash.” Along with the story, the Journal published image No. 371N3105, a different photograph of the wrecked plane.