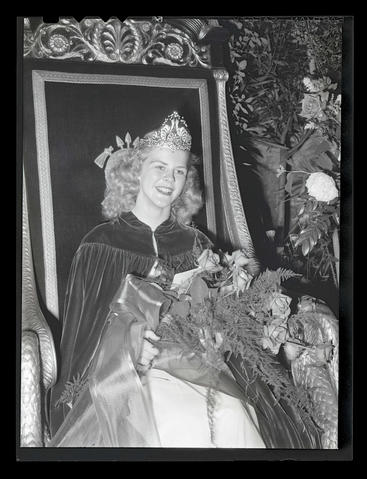 Photograph showing Jo Anne Bush sitting on a throne on May 27, 1944, after she was selected as the Portland Rose Festival queen during a ceremony at the Portland Public Auditorium (now the Keller Auditorium). She is smiling, wearing a tiara and cape, and holding a bouquet of roses. Bush was the princess from Grant High School. A cropped version of this photograph and image No. 375A0321 were published on the front page of the Oregon Journal on May 28, 1944. This photograph had the following caption: “QUEEN JO ANNE I, in royal raiment, smiles as subjects acclaim her.” The photographs accompanied a story with the headline “Jo Anne Bush New Queen of Rosaria” and the subheading “Blonde, Green-Eyed Grant High Senior Wins Vote of Rose Festival Judges.” Also see related image Nos. 375A0317, 375A0319, and 375A0322.